A game called Steelrising is currently in closed beta. Since the king of Paris intends to wreck havoc in the city, you take on the role of Aegis and join the revolution. You have to put an end to the revolution as he introduces Automats to stymie it. This action RPG is undoubtedly worth playing because there will be a lot of bloodshed to stop. While first, you will have to select one of the four classes offered. While you can look at Steelrising’s Best Starting Class, this guide is a Tier List for the same class. The Tier List is determined by various elements, including gameplay and metrics. Therefore, review this Tier List and pick a class that suits you.

When upcoming updates affect the character’s gameplay and traits, the Tier List may change. As of this writing, we’ll stick with Steelrising’s Starting Class Tier List:

Although a lot of players find Bodyguard challenging, it is at the top of our Tier List for a reason. especially for its close-range melee combat and great damage resistance. You will be able to unleash on foes once you unlock equipment. 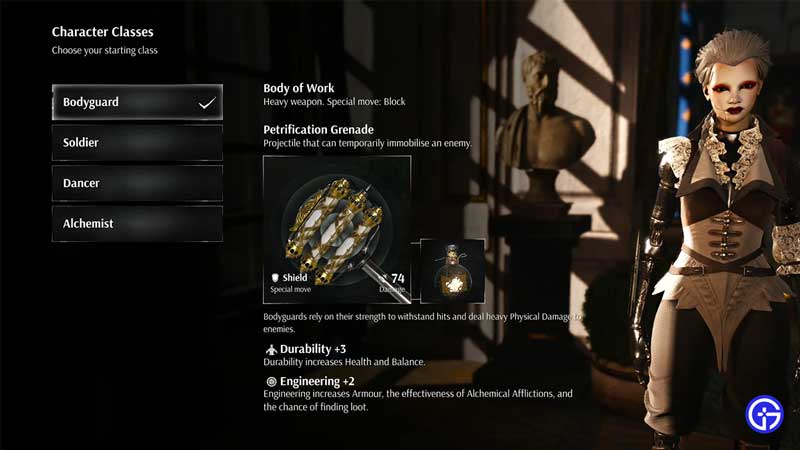 Dancer is renowned for its damage-dealing weapon, the Armored Fans. Additionally, the weapon scaling is enhanced by the Dancer’s Agility attribute.

The magic class of alchemist also performs exceptionally well. Alchemist would be a good for you because you might favour ranged combat.

The magic class of alchemist also performs exceptionally well. Alchemist would be a good for you because you might favour ranged combat.
Although we do not think that any class in the game is inherently poor, Soldier is not a popular option. The traits of other classes overwhelm this one, even though the Halberd will provide the Soldier a melee weapon with ranged skills.

The list of starting class tiers in Steelrising ends there. While you’re here, be sure to look at our guides for further information on gaming vitals.