Redstone is a Minecraft component that functions similarly to electricity in real life. They send a signal and trigger mechanisms, allowing them to be utilized to automate resource collection and build fascinating things like a TNT Mining Duplicator

You may be wondering what they do and how they work, so in this article we will look at how redstone may be used. This will help you comprehend redstone and use your creativity to help you make something with it.

Redstones can also be found as loot within the chests of Dungeons, Mineshafts, Strongholds, Villages, and Woodland Mansions. Aside from that, they may be farmed by killing Witches, who drop between 0-2 and 0-5 redstone when the Looting 3 enchantment is used. Alternatively, if you’re a pacifist, you can trade with a cleric villager. Furthermore, in Minecraft 1.19, Jungle Temples and the forthcoming Ancient City include naturally formed redstone wires that can be gathered.

Once put, it emits a power known as “redstone signal” and has a power known as “signal strength” that ranges from 1 to 15. And the signal power decreases by one for every block travelled, limiting the travel range of a signal to a maximum of 15 blocks on its own. This redstone signal activates many redstone components, including the sticky piston pictured above, which pushed the block directly in front of it.

Making Use of Redstone

After obtaining redstones from the depths of mines, you can now use them in a variety of ways:

When put, redstone resembles a blood spatter. These can be utilised as decorations while making horror maps to enhance the atmosphere. You may make the redstone dust look like stains of blood using the Debug Stick item to create even more horrific situations.

Many old mapmakers employ this type of decoration on their maps to  a sense of fear in players or to create a supposedly intense build up for particular scenarios.

Redstone can be used in a variety of ways, including as a crafting material. There are now 14 crafting recipes in the game that employ redstone, two of which are used for transportation.

All of the crafting recipes that contain redstone are listed below:

Redstone blocks are compacted redstones made up of nine redstones. Prior to the 1.11 upgrade or before November 14, 2016, this block was largely utilized for constructing BUDs or Block Update Detector.

Clock Clocks were included in the Alpha 1.2.0 release, making it one of the first redstone recipes. Clocks display the current in-game time based on the sun and moon’s position, which means they only work on the Overworld.

The compass, which was added in the Alpha 1.1.0 release, is used to establish where a player’s spawn location is. The compass, like clocks, only operates on the Overworld, but with the 1.16 release update, they may now be utilized in the Nether and End dimensions by using Lodestones.

These rails, which were added during Minecraft Beta 1.5, function similarly to pressure plates, but only for Minecarts. If a minecart runs over Detector Rails, it transmits a redstone signal to the nearby blocks as well as the block where it is put. When combined with a comparator, it can also broadcast weaker redstone signals ranging from 0 to 15 if a minecart carrying a container, such as a minecart chest, passes over it.

Dispensers were added to Minecraft in the Beta 1.2 update. The block discharges certain goods but only drops them on occasion. It may dispense arrows, fire charge, flint & steel, splash and lingering potions, among other things. Others are dropped because they lack dispensable statuses or are simply things.

Droppers, which were included in the 1.5 release update, function similarly to Dispensers, with the exception that Droppers “drop” all items.

Note blocks were added in Beta 1.2 and may be created with any of the eight types of planks and a redstone in the center. When activated by a redstone or utilized, this block generates sounds. This is how many YouTubers make music.

which were introduced in the Official Release 1.11 update, are now the official BUD redstone component used in redstone contraptions. If the block behind the arrow changes, they send out a redstone pulse.

Originally a mod for Minecraft Beta versions, they are now included in the Beta 1.7 update. Pistons are redstone components that can push blocks in front of them. In a crafting grid, placing a slimeball on top of a piston transforms it into a Sticky Piston, which can push and pull the block in front of it.

Rail that is powered

Powered Rails, a mode of transportation that employs redstone as a crafting ingredient, has been included in the Beta 1.5 update. When energised, these rails improve the speed of any Minecart that goes across them. Putting powered rails in a series will power the other rails as well, up to a maximum of 17 rails (one in the middle and eight on both sides).

Lamp made of redstone

Redstone lights, which were included in Release 1.2, are a toggleable light source. Typically used as base lighting, although on sometimes utilized as an LED light for making redstone computers or redstone calculators in-game. Redstone lights are solid bricks that can pass redstone signals if powered by a redstone repeater.

It is also one of the game’s early redstone components, having been incorporated in the Beta 1.3 release. The repeater extends the travel distance of a redstone signal by 15 blocks. It takes at least one redstone signal power from behind to generate a new 15 signal strength in front. Another powered repeater facing its side can also be used to lock it.

Redstone torches are the initial component that adds one redstone tick to the travel time of a redstone signal. It was added in the game’s Alpha 1.0.1 release. It functions similarly to a Redstone Block, however it can only be toggled and cannot be moved.

When hit by a projectile, the target block emits a redstone pulse, as demonstrated at Minecon Live 2019 and included in the game’s 1.16 release version. The strength of the signal it sends is determined on where the missile lands. The stronger the redstone signal produced by the projectile, the closer it is to the center.

When hit by a projectile, the target block emits a redstone pulse, as demonstrated at Minecon Live 2019 and included in the game’s 1.16 release version. The strength of the signal it sends is determined on where the missile lands. The stronger the redstone signal produced by the projectile, the closer it is to the center.

Redstone’s most basic and primary purpose was to be utilized to build fantastic contraptions. Since redstone was brought to the game, players have utilized it to build doors and basic traps. The TNT trap, which used Stone Pressure Plates on a stone walkway and was connected to a TNT down the pathway, was one of the oldest traps known. When a player steps on the pressure plate, a redstone signal is sent to the redstone line below, igniting the TNT and eventually resulting in an explosion when the player reaches the spot.

Aside from traps, several players employ redstone to automate farm tasks. Some are massive, while others are small. There are both simple and complicated farms. An early semi-automatic farm that employs dispensers loaded with water, connected by a line of redstone dust, and can be actuated by a switch like a button or lever is a nice example of a rudimentary farm.

Many people will be interested in learning how to use redstone comparators because they have so many functions and applications. But, first, we’ll go through the essential components before moving on to the redstone build instruction that you can utilize in your worlds.

Finally, redstone is simple to use and can be mastered by simply tinkering with it. Complexity only appears when this red-colored dust is combined with its other components, but it also unlocks a plethora of new gaming options such as mechanised farms, weaponry, traps, and even computers if you have expertise and understand how it works! When you combine the command blocks and commands, you might be able to create your own map.

Is there anything you can do with Redstone?

How to Use Redstone in Minecraft Image Result
You can use redstone to make lights, open doors, and construct equipment that lift stones, raise bridges, and move water. It all begins with simple building components and power sources that you combine to create the tools you require. 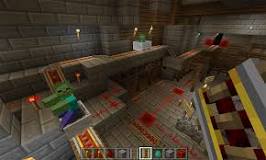 In Minecraft, how do you activate Redstone?

How to Use Redstone in Minecraft Image Result
Upward power is also the easiest to recall!
Step 1: Place a brick on the ground.
Step 2: Place a redstone torch on top.
Step 3: Place another block on top of that.
Step 4 Either finish or continue.
Step 5 Begin with a redstone torch and a block.
Step 6 Position a brick above the torch.
Step 7: Repetition or completion!

What happens when you right-click Redstone?

If the redstone wire is in the shape of a cross, the player can right-click to change it to a dot. A redstone dot does not power anything nearby, but it does power the block beneath it.

In Minecraft survival, what do you do with Redstone?

How do you turn on Redstone beneath a block?

When redstone wire is near to a powered block, such as a power source, the block to which a lever is attached, or the block above a redstone flame, it becomes powered. Redstone electricity flows along the redstone wire, supplying power to the blocks beneath the wire.

How do you take out Redstone?

Image outcome
Redstone torches can power redstone dust beneath them, permitting downward transmission. Torch ladders are 12 tileable upwards but 22 tileable downwards. A sticky piston pointing downward can push a redstone block into the space above redstone dust on top of a solid block.

How do you link Redstone to the piston?

The redstone must be placed from the lever such that it travels up a block before connecting to the piston. The piston must be set in such a way that when expanded, it prevents the redstone from travelling up the side of the block without breaking it.

In Minecraft, what can you do with Redstone dust?

Redstone dust can be obtained by mining redstone ore underground. This dust can be wired across the ground, attached to levers or doors, and crafted into torches and repeaters to build machines.

How can you turn off a Redstone Torch?

You must use a Lever to turn these off in the quickest and most effective manner. To make this, you’ll need one Stick and one Cobblestone. You can totally block the flow of electricity in a circuit by placing a Lever adjacent to a Redstone Torch and flipping it once.

Who is the best Redstone player in Minecraft?

Mumbo Jumbo, sometimes known as the King of Redstone, made a profession out of redstone lessons and showcases, which have received millions of views over the years.

Here are Best Places to Find Ore in Minecraft – Updated