It’s a refreshing counterpoint to the stereotypical portrayal of Chinese parents. On the internet, anecdotes and falsehoods about Asian families’ authoritarian parenting styles have taken on an oftentimes harsh, but almost hilarious tone.

Consider the meme “High Expectations Asian Father,” which depicts a father figure who has absurdly high scholastic expectations. Consider the many stereotypes about overbearing Chinese parents in popular culture, such as Constance Wu’s character Jessica Huang, the no-nonsense mother to her three sons in the sitcom series Fresh Off The Boat, or writer Amy Chua’s parenting memoir, in which she described her strict parenting tactics for her daughters, which sparked outrage: she won’t let them go to sleepovers or get any grade lower than a “A,” while forcing them to pick up trash. 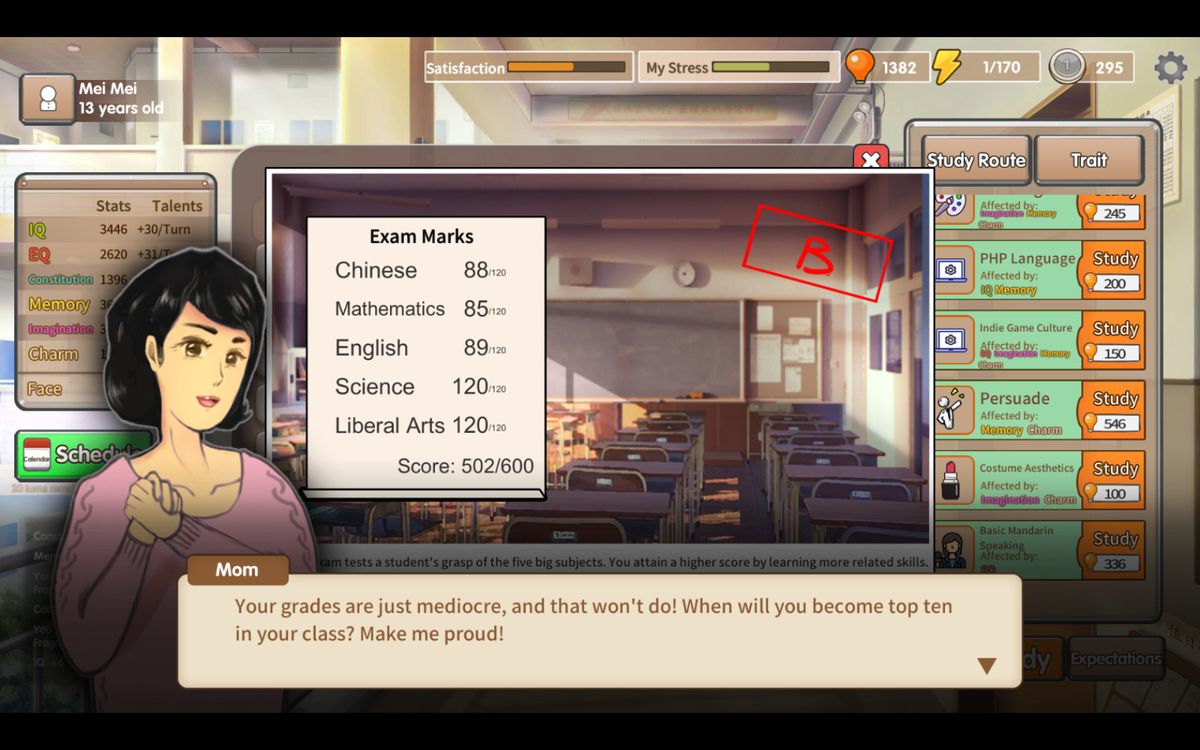 As the kid of strict Chinese parents, I can speak to the validity of these stories to some extent, although they miss the nuance and complexity of real life, as do so many clichés. They don’t portray the joys of growing up, such as sneaking off to the playground with your grandparents while your parents aren’t looking, or the shame of having to carry textbooks with awful, discarded newspapers as book covers.

Yes, the game includes a lot of academic pressure; receiving only mediocre scores, such as a “B” on your mock tests, will only make your parents scowl in disdain. However, it also emphasises softer, funnier, and more unexpected features. 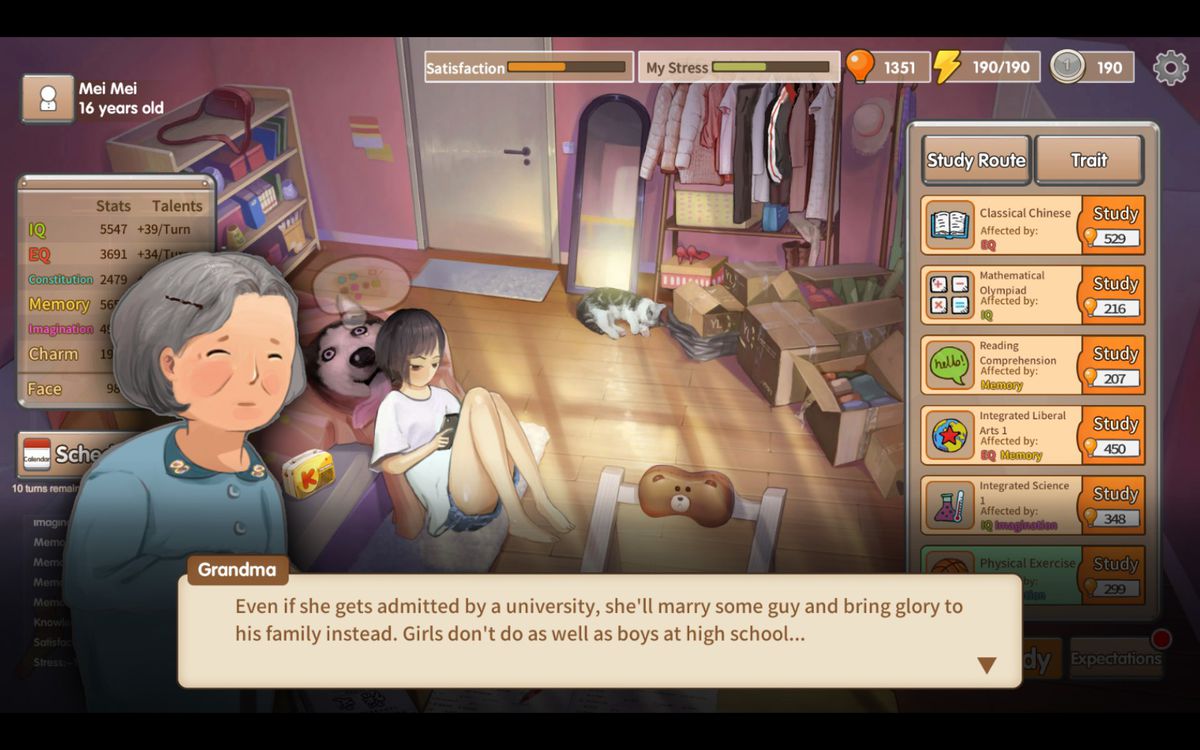 The game first gained notoriety when it was released in September 2018 as a Chinese language-only product, quickly climbing the Steam rankings and even outselling AAA games like Fallout 4 and Civilization 5 for a time. It has a far shorter story than surviving the apocalypse or dominating the planet. Players must maximise their metrics as much as possible, starting as a toddler – IQ, EQ, constitution, memory, and imagination — and ace their examinations without breaking under the pressure. All of these efforts are geared at the gaokao, a yearly university entrance exam that players must take in the game’s climax.

In China, the gaokao is the only route for students to pursue higher education, and it is also one of the few opportunities for low-income families to secure a better life for their children, as it provides them with the rare opportunity to enrol in a prominent university. The academic burden might be tremendous because this exam defines a student’s future in China. It’s in this setting that you’ll be juggling parental expectations and your stress levels in Chinese Parents, which can quickly escalate to crippling proportions if you’re not careful. 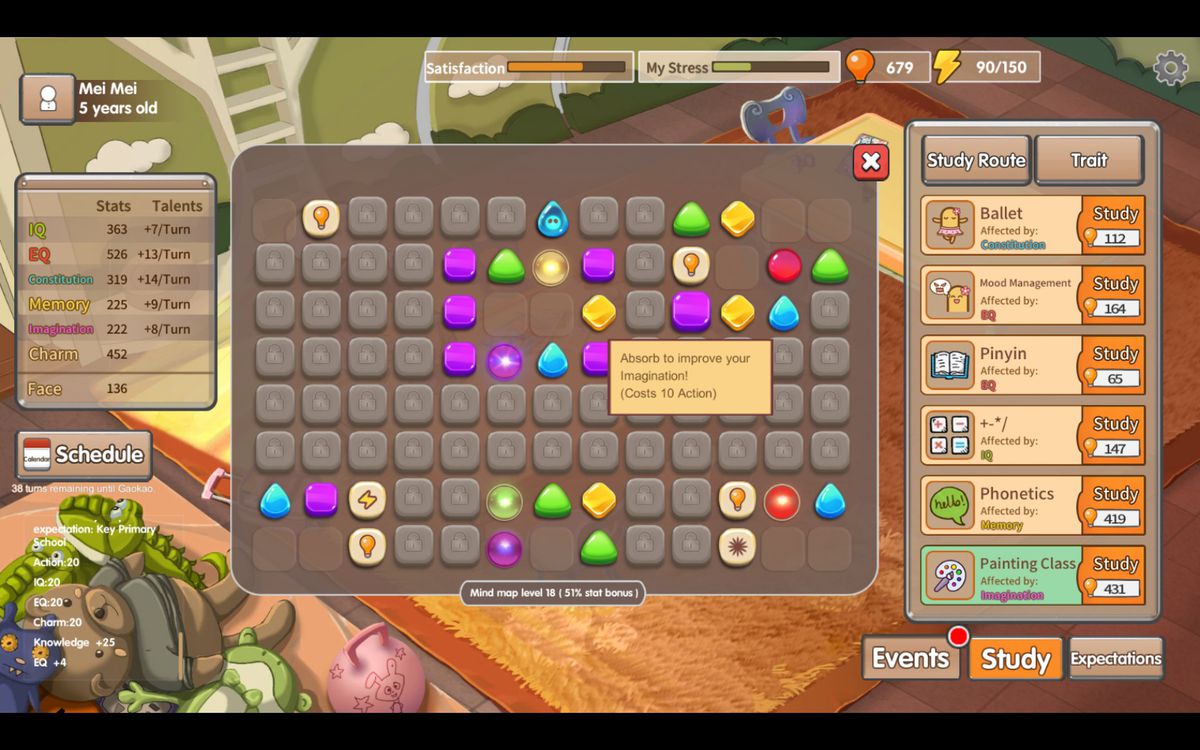 Because of the growing popularity of the game, its creators, Moyuwan Games, decided to localise it for a Western audience. The poignancy and humour of the game are engaging and universal enough to keep Western players captivated to the screen.

Learning to crawl, speak, walk, and swim as a toddler, then later as an elementary student, picking up topics like English, Chinese, and math After you organise your activities for the week, which include the abilities you’ve purchased, your round comes to a close: Will you spend your time in the park frolicking, or will you spend days practising fundamental algebra? These choices may appear insignificant, but if you play your cards well, you can unlock hidden skills, improve your stats, and gain access to a slew of other advantages. 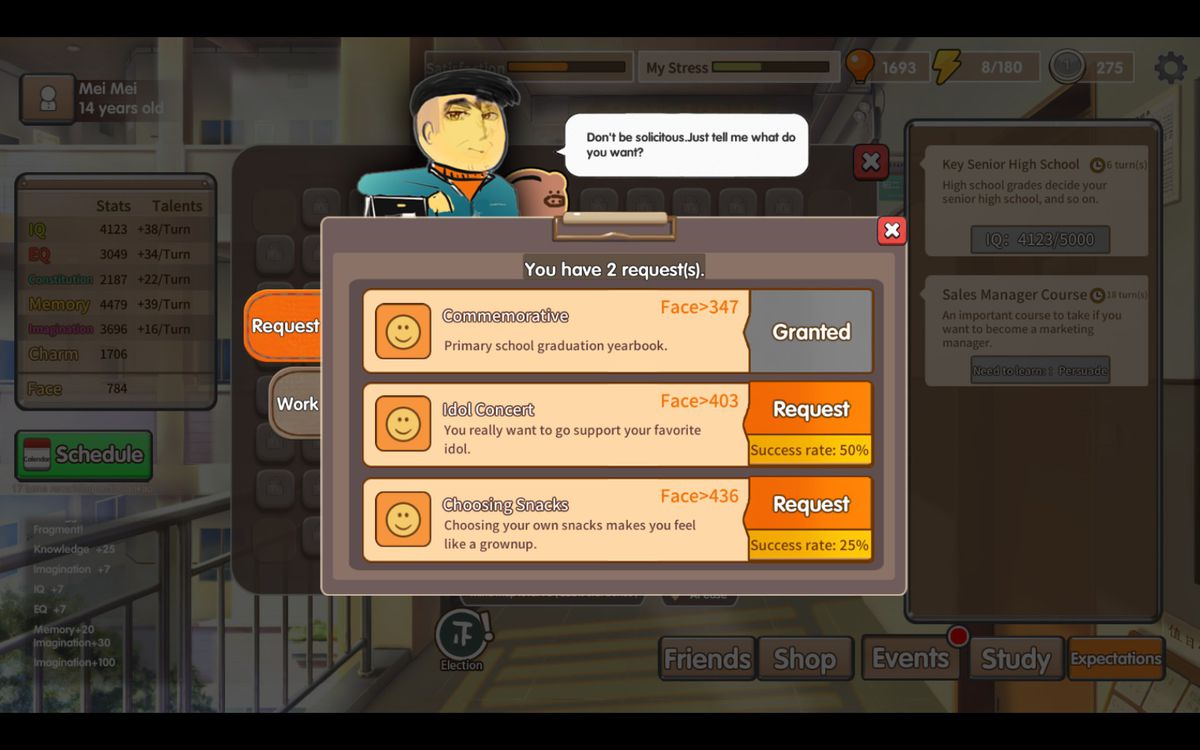 Chinese Parents is humorous because it is astonishingly true in capturing the peculiarities, joys, and sorrows of children. If you use skills regularly, for example, you may soon unlock characteristics, which are essentially enhanced versions of the talents. Rather than crawling, you can do midair flips, and instead of just clapping along to music, you can become a prodigious young drummer who competes in state-wide competitions. Your parents use such characteristics as trump cards in one-on-one brag battles with inquisitive relatives and overachieving neighbours, similar to a Pokémon fight in which you must whittle down an opponent’s hit points to beat or embarrass them.

The sociological term “face” is one of the most difficult notions to describe accurately. In a nutshell, it’s the concept of enhancing your parents’ reputation and status among their peers through your efforts and accomplishments. While you can’t directly affect or raise it by collecting gems, you can get more “face” by doing well in tests, helping your parents win bragging challenges by unlocking outstanding qualities, or participating in social gatherings. Face doesn’t effect your character’s grades, but it does have a subtle influence in the game; you can ask your parents for favours, such as more pocket money or a new toy, both of which can affect your skills and stress levels. 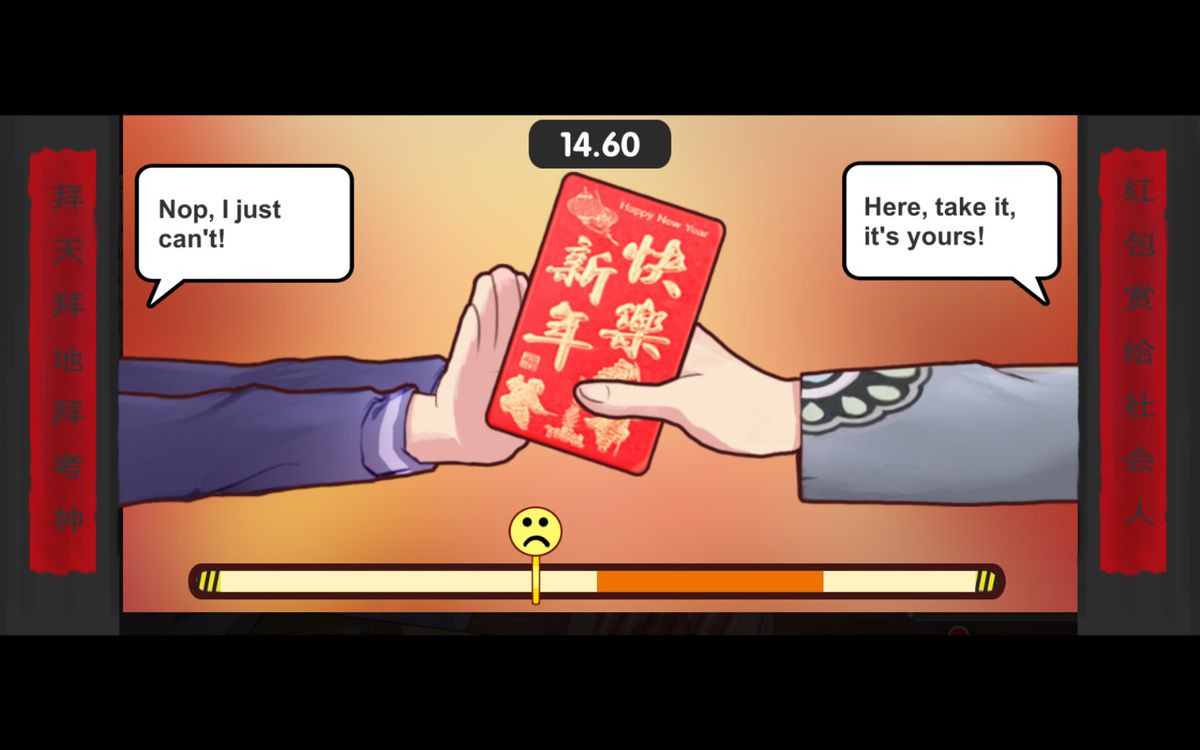 Then there are random occurrences, which present scenarios that you respond to through multiple-choice questions, as well as social circumstances such as accepting red packets, which are monetary gifts given by relatives at Chinese New Year. There is a narrow line to tread in this situation, reflecting the intricacies of such interactions in real life; you can’t appear too eager to accept the red packet, but you also have to be cautious of your relative’s sentiments if you refuse them too overtly. The game avoids becoming too heavy-handed or didactic in its portrayal of Chinese-style parenting by presenting these situations in a funny, over-the-top manner.

With so many Chinese puns and pop culture references — one part mocks the country’s obsession with reality singing competitions and dating game shows — catching the intricacies of these gags is definitely difficult. As a result, the translations are mainly functional and seem understandable. One random event, for example, describes how you would “change up the content” of Three Character Classic — a Chinese classic text — while reciting it as a child, but it ignores how kids would frequently mispronounce it on purpose because it’s amusing; even the accompanying illustration contains the mispronounced words in Chinese. Meanwhile, the instructions for a few puzzles are a little hazy at first, but they’re not too difficult to figure out after that.

Meanwhile, the instructions for a few puzzles are a little hazy, but they’re not too hard to figure out after a few rounds of trial and error. Despite this, the strains of Chinese childhood and preparation for the gaokao are still tangible, leaving my palms sweaty and my heart palpitating with worry after cramming for and enduring arduous rounds of tests. My method of operation entails meticulous planning and strategizing for studies and classes in order to maximize my grades, sometimes at the sacrifice of my mental health. It’s almost as if you’re running a well-run firm that runs like clockwork.

The great strain and frequent stress can cause pessimism, worry, and even severe despair in your character, as Chinese Parents makes no illusions about this system being ideal. The game, on the other hand, avoids making any overt remarks. Instead, it generally depicts the experience as a normal part of childhood, while spotlighting a lesser-known yet comforting aspect of Asian parents’ affections: modest, rare doses of tenderness.

Even when my student’s grades were clearly suffering, her mother would console her by preparing her a bowl of chicken herbal soup or treating her to a special supper at a fine restaurant. It’s a cute and relevant story. In the end, Chinese Parents is a tribute to, well, Chinese parents — their high expectations for their children, the unique methods in which they exhibit their tough love, and all the other quirks that come with Chinese parental love.

Is Chinese parents a good game?

Are Chinese parents worth?

Chinese Parents is an approachable and fascinating life sim that should relate with just about anyone who has gone through childhood and adolescence, thanks to its subtle but compassionate mockery of Chinese traditions and practices. Even if you don’t succeed, you’ll have a nice time.